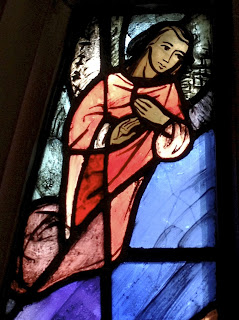 The prophecy foretold by the Angel Gabriel to Zechariah about the birth of a son by his wife Elizabeth was deeply profound.  Zechariah was filled with doubt as his wife was past the age of conceiving.  Due to his clear misgivings and apprehension at the Angel's words, Gabriel pronounced that Zechariah would be unable to speak until the day of his child's birth.

The prophecy claimed that the son of Zechariah and Elizabeth would bring them great joy and gladness---and this joy would be shared by many and that John will be great in the sight of the Lord.  In contrast, Elizabeth firmly believed the Angel's words and prepared herself for the birth of the child.  Elizabeth went into seclusion for five months saying ---this is what the Lord has done for me when he looked favourably on me and took away the disgrace I have endured among my people.

As John was the name chosen and spoken of by the Angel Gabriel, Elizabeth and Zechariah agreed and respected this choice of name.  To further cement the importance of the name given to his son, Zechariah had a tablet created in which John's name was written and immediately his mouth was opened.

Although Zechariah expressed doubt at the possibility of the birth of a son I believe that it was the message of the Divine Light that allowed them to overcome their fear and apprehension and accept the prophecy.

Posted by Sisterhood of St. John the Divine at 9:16 PM