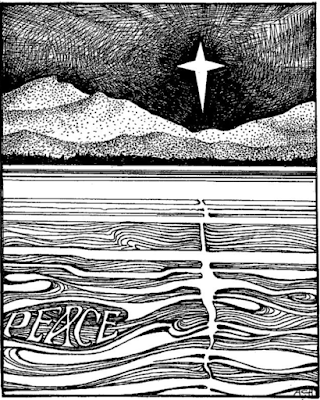 
Advent Reflections 2019
by the Oblates and Sisters of the Sisterhood of St. John the Divine

Forward
“You are the source of all life;
in your light, we see light.”                 Psalm 36:9
The Scottish writer Robert Louis Stevenson suffered a good deal of his life from the debilitating complications of tuberculosis.  As a child in the late 1800’s he spent much time in bed, reading and daydreaming – that’s probably where those great stories he later wrote were formed.  With no electricity, the streets of the city were pitch-dark at night fall. His poem “The Lamplighter” tells of his sitting in bed, watching the dark street below as the lamplighter made his way up and down, lighting the gas lamps one by one. He said it was as though the lamplighter was poking holes in the darkness, and once all the lamps were lit, the whole street, as far as he could see, was bathed in a soft, welcoming light.

Advent is a natural time of introspection – and of looking forward to the joy that awaits us. We’re not asked to ignore the pain and tragedy of the world or called to smile blithely as though nothing weighs us down. Quite the contrary, we are called to embrace the world, with all its cares and needs. By offering welcoming light and joy, we can bring a sense of the Divine to those we encounter, hearing and pleading their cause, lending a hand, giving a hand-up – in short, by poking holes in the darkness. Jesus talked much more about how to live on earth now than about how to get to heaven later.

In these daily Advent reflections, written by SSJD Oblates and Sisters, we have resolved to be bearers of light and bringers of joy to a world so in need of both, for we have come to know them ourselves in Christ. It is our prayer that these little embers, the lectio of our lives, will provide light for your path as we walk one another home. 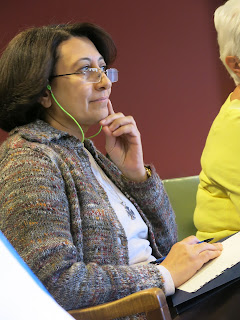 It is with grateful hearts these Advent Reflections
are offered to
the Glory of God, and in loving memory of our dear Oblate friend,
Mervat Iskandar
in thanksgiving for for our companionship in Christ.


“Grace to you and peace –I always thank God because I hear of your lovefor all the saints and your faith in the Lord Jesus.”
Philemon 1: 3-4

Permission to reprint or use the contents of this booklet should be sought from the author or authors affected. Please contact SSJD to obtain this permission.
Posted by Sisterhood of St. John the Divine at 10:12 AM No comments: