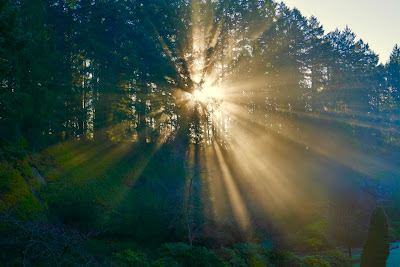 Light represents life. God is light and He gives life. The wise men followed a light that led to Jesus. Some people see light during meditation. There have been many reports of people being legally dead and brought back to life and after recovery, they talk about having seen and been drawn toward a bright light.

As a pilot, I have encountered many strange things in my career. On one flight, we were flying at night in cloud under the direction of a radar controller on the ground. In this environment, one sees nothing but a dark gray wall around the aircraft.

Suddenly, we had a large bright light directly in front of us. There was no way to tell how big it was, but it filled about a quarter of one side of the windshield. We turned in both directions, but it moved to stay in front of us. We asked the ground controller if he saw anything on radar in front us and he said there was nothing anywhere near us. Ten to fifteen minutes later, it suddenly got bigger and came straight at us. Finally, it moved and passed us close to our right wing tip, rocking our aircraft. Again, we asked the controller if he saw anything in our vicinity and he said ‘no’.  Celestial?  As a crew, we decided that we could not tell anyone about this because no one would believe us.

As Christians, we cannot be in the dark about events that happen in the world. We must be the light that shines in the darkness. When we pray, we seek light not darkness, because the light sees us.


Nora Bottomley
Posted by Sisterhood of St. John the Divine at 5:30 AM